As dental implants in Houston have become more and more available the efforts to decrease the amount of time required before the implants can be used has become more and more important. Many people do not want to pay for the dental implants only to learn that the standard titanium root replacement implants are supposed to remain buried and undisturbed in the bone. They believe that if they are going to pay that much money, that they should get the results immediately.

Because of this impatience, a new type of implant was developed. This implant was very small in diameter, only 1.8 mm versus the 3.3 to 6 mm diameter of the standard root replacement implant. This implant also was developed with a small ball on the top of it that could be incorporated as a snap for a denture or to secure a temporary bridge. These implants were place in between the standard implants at the initial implant surgery. The teeth were attached to the mini-implants, usually 4-6 of them, with a rigid or hard connection so that the patient could walk out with secure teeth. Since they were only going to be needed four to six months, it was ok to overload them because a long term integration of the implant to the bone was not desired. At the time to uncover the standard implants, it was found that about 50% of the mini implants had actually integrated or bonded to the bone. For those that were going to have a denture made over the top of the implants this meant more holding power than originally planned. For those progressing to bridges, the implants had to be removed. 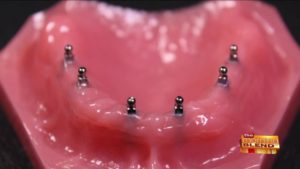 Several of us began to wonder if we used a soft attachment to these mini-implants could we get them all to integrate or bond to the bone without resorting to the more expensive standard root form implants. In the few short years that this procedure has been used, the success rate has been high. The new technique requires no surgery and the implants are used immediately. Because of the higher potential failure rate, we are recommending four to six implants for each denture being supported. These implants only work with partial or complete dentures and the dentures must fit properly or the stresses on the poor fitting denture can cause implant loss. There is usually so little discomfort that when we went to Brazil in July of 2000 with the LDS Academy of Dentists, we actually placed mini-implants in three patients and they required no pain medications. Their response the next day was that it was so nice to be able to eat without the denture moving around.

The mini-implants are a great service because they are so much less expensive. Since there is no surgery or sutures and the snap attachments are incorporated into the implant when it is manufactured, the savings are passed on to the patients. While there is a higher failure rate, usually associated with persistent discomfort, if the implants do require removal, the bone heals as though nothing had been there in the first place.

What are the Benefits of Mini-implants?